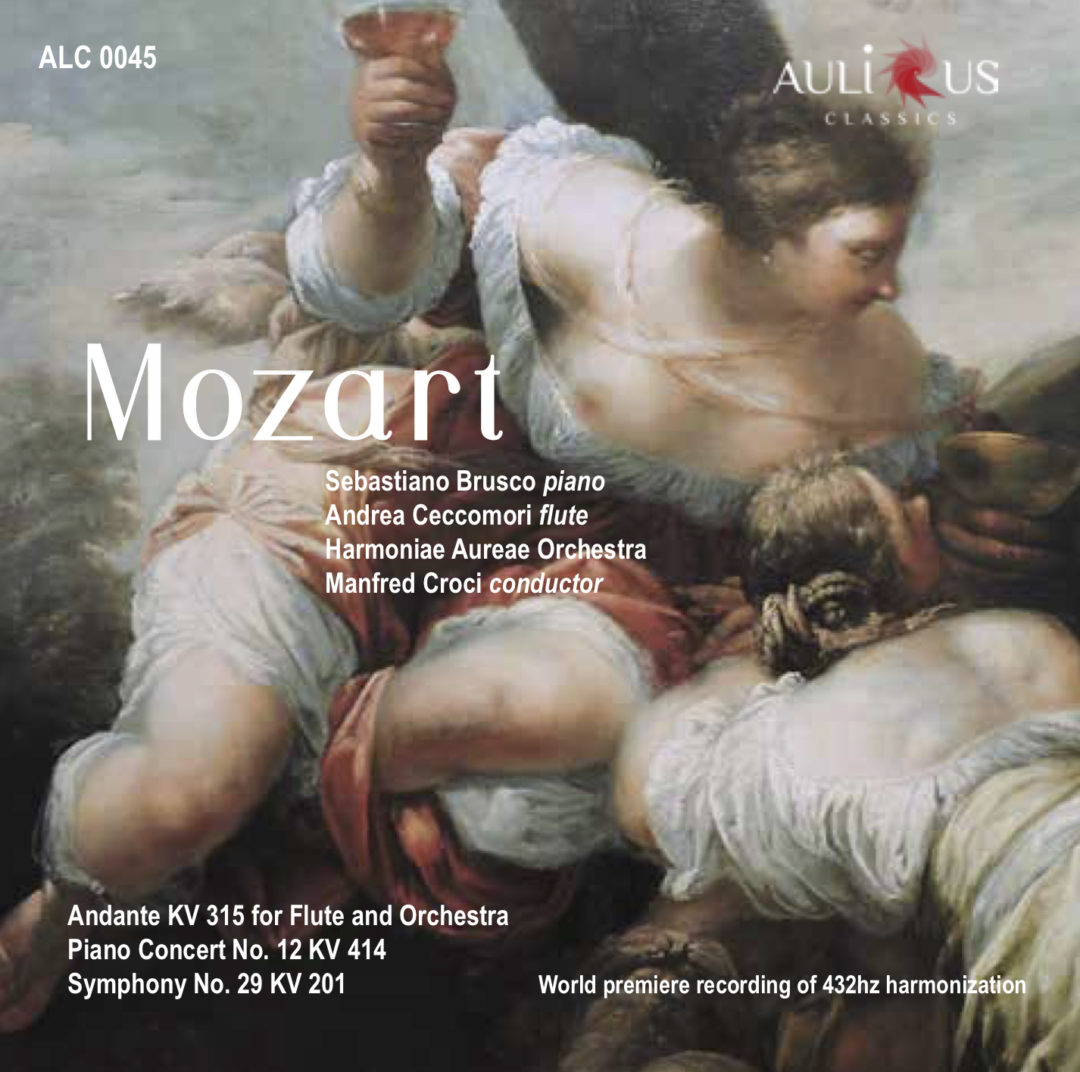 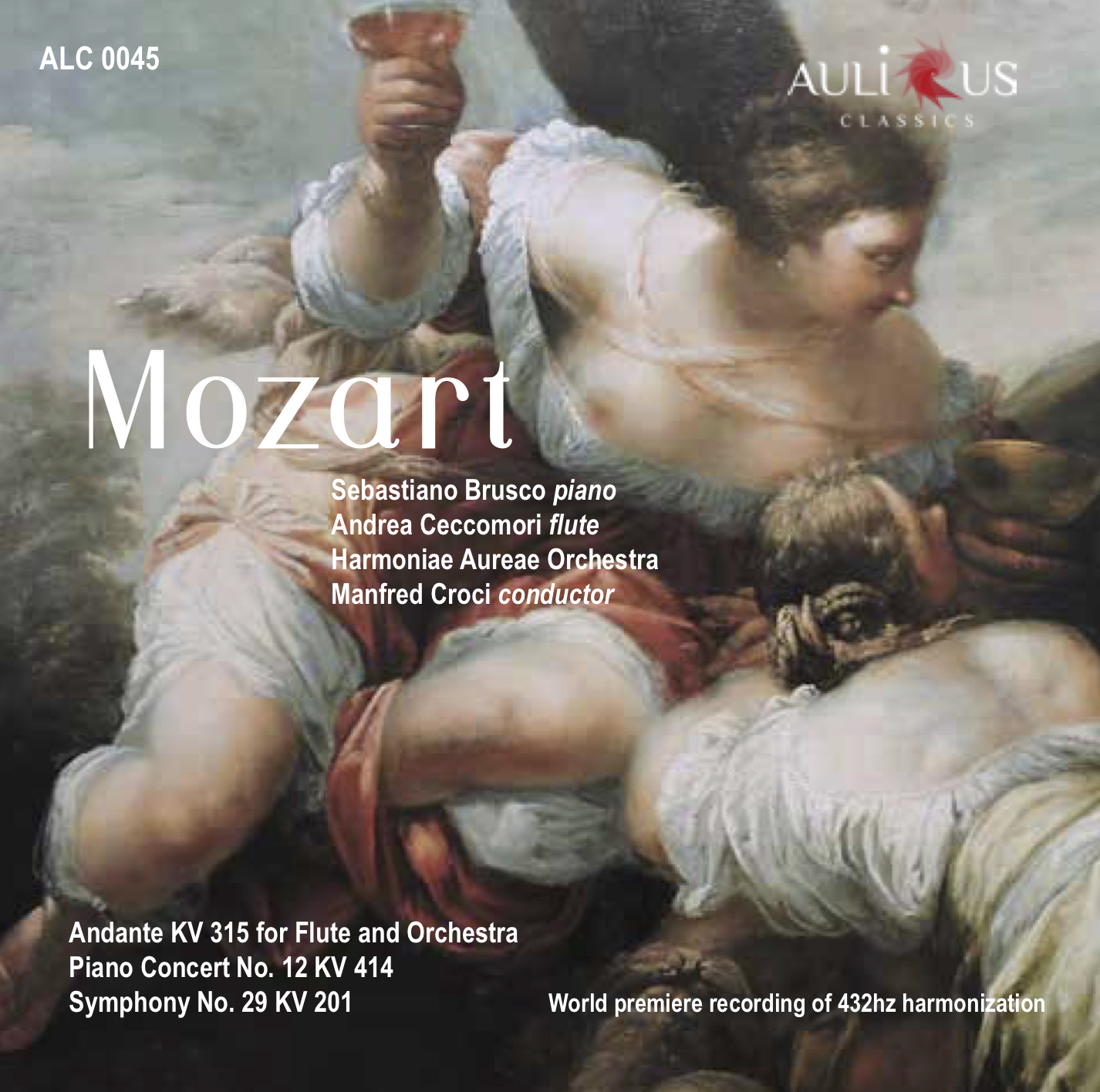 Published on Aulicus Classics Mozart label, here we present a CD dedicated to some of the most beautiful pages of the Mozart repertoire recorded at 432 Hertz: the Andante in C major for flute and orchestra KV 315, the Concerto nr. 12 for piano KV 414 and the Symphony in La Major KV 201.
The project, realized in the occasion of a concert at the Our Lady of the Sacred Heart’s chruch on 6 January 2020, sees the protagonists Sebastiano Brusco at the piano and Andrea Ceccomori at the flute accompanied by the orchestra Harmoniae Aureae directed by Manfred Croci The golden tuning, in which the “la” is tuned to 432 Hertz, generates an harmonic and enveloping frequence, able to return a natural and rich sound, that allows you to completely dip yourself in music
The album will be available in all major online stores and digital platforms.

The intonation and frequency accompany the listeners in a timeless atmosphere, in a total balance with the frequencies of the human body and mind, but above all in line with the original sounds sought by Mozart, recreated through the talent of the musicians of the orchestra Harmoniae Aureae, who since their debut in 2019 have continued to pay homage to the genius and poetry of the composer of Salzburg.

Manfred Croci (Director): graduated in violin at the Conservatory of Santa Cecilia in Rome, and earned a degree in chamber music at Santa Cecilia and a degree in concert at the Hochschule für muzik in Würzburg in Germany. He studied with some of the best violinists in the world such as Ghirshenko, Vinnitsky and Tretiakov. His conducting career follows the footsteps of his father, Cesare Croci. During his career he has conducted the Rome Symphony Orchestra, the Italian Symphony Orchestra and the Romænsemble.

Sebastiano Brusco (Piano): winner of many prizes both in Italy and around the world, as a solist he played together with some of the most important orchestras of the world: Solisti Veneti, Orchestra Verdi, National Transylvanian Orchestra, the orchestra of Tirana and la sinfonica abruzzese. During his tour in Cina he took, for the first time in Asia, a concert with two pianos on the stage: one tuned at 432 Hz and one at 440 Hz at the moment he is recording the full Mozart’s sonata for piano, always fo the Aulicus Classics.

Andrea Ceccomori (Flauto): he completed his studies at “Accademia Chigiana” of Siena. He now composes music, and also plays but classic and contemporary music, dedicating himself to discover new artist and sonority from all over the world. During his carreer he achieved playing in front of Queen Elizabeth and Pope Francesco, and he also frequently plays for Italian’s radios an tvs. Today he teaches different masterclasses around Italy and writes for different magazines as Amadeus, Falaut and Syrinx.